How have I never done this program before?!  It's inexpensive and quick to set up, and it's a crowd-pleasing STEAM activity!  There would be a million ways to structure this program; here's what I did:
Before the event (I actually had early arrivals help me with this) I distributed cups of regular size and mini marshmallows, along with spaghetti noodles, penne noodles, toothpicks, and paper plates, to each table.
As participants arrived, they assembled themselves into teams; each team had its own table.  I asked teams to name themselves, which was a nice icebreaker.
I gave the first challenge: Build something you could use to survive in the jungle.  Teams worked together to build something to meet the challenge.  When all teams were finished, I had them take turns shouting out the names of the items they built.
After the first challenge, I rewarded each team with a cup full of jumbo marshmallows.  This was a HUGE hit!
I gave additional challenges:
Build something you could use to survive in outer space.
Build something that's alive.
Build something really tall.
Build something really long.
I had extra supplies on hand, and teams were welcome to help themselves without any limit.
There was no competition aspect.  We just had fun building together.
One piece of advice: use plastic tablecloths!  I tried getting teams to build only on paper plates, but that lasted about 3 seconds.  Save yourself some clean-up time and cover your tables! 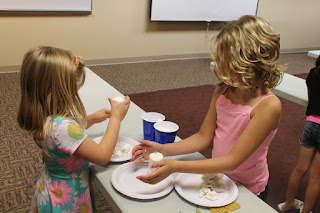 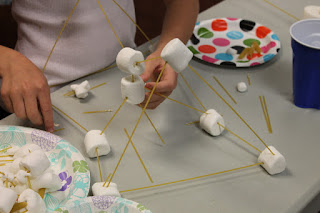 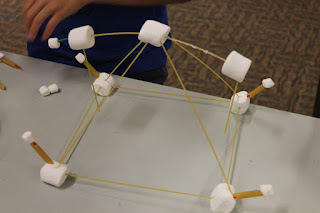 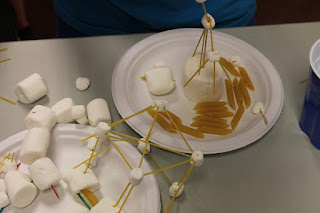 Posted by Amanda at 2:14 PM No comments: